â€œOver the years he just couldn’t keep up,â€ Thomas said of the Heritage Bowl. â€œWe couldn’t find a partner company that believed in the vision and the concept. When I became Commissioner (MEAC), I had a vision that if we could align with a corporate partner, be it ESPN, NBC, or Fox, then we could maintain it. We would need to invite the two champions of MEAC and SWAC.

MEAC Commissioner Dennis Thomas speaks during a press conference during the 2020 MEAC Basketball Tournament at The Scope in Norfolk, Virginia on March 11, 2020. {Photo by Mark W. Sutton} 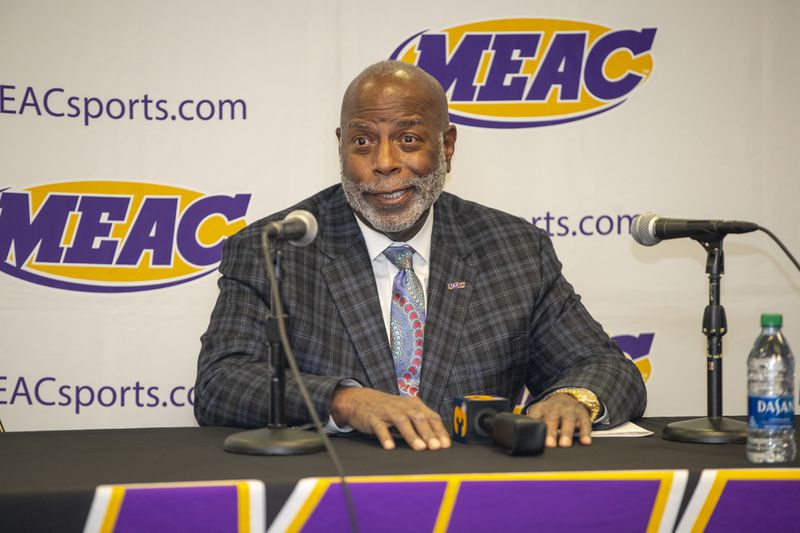 MEAC Commissioner Dennis Thomas speaks during a press conference during the 2020 MEAC Basketball Tournament at The Scope in Norfolk, Va. On March 11, 2020. {Photo by Mark W. Sutton}

â€œWhen ESPN came to the table for a conference line deal, we were discussing a preseason pitching competition (which became the MEAC-SWAC challenge),â€ Thomas said. â€œThen I said we needed a bowl game in the playoffs. “

While Thomas managed to strike a deal with ESPN, he struggled with other schools to agree on the bowling ball.

â€œAt the start ESPN said, let’s do it,â€ Thomas said. â€œWhen I said to presidents, chancellors, athletic directors and head coaches, they said, ‘We want to be in the FCS playoffs.’ So when they said, ‘No, we want to stay in the playoffs.’ It was a difficult point to say the least. I had to go back to ESPN and say we couldn’t do it.

This was something Thomas knew he had to fight for and convince other schools to join him. He described his persistence.

â€œWhat happened was every year I would bring it back, and they would say no,â€ Thomas said. â€œAfter the fifth year, they said, ‘Dennis, don’t talk about it anymore.’ So I reviewed my strategy. I asked John Skipper (then President, CEO of ESPN) to come and speak with the Presidents and Chancellors. He come and spoke to them, and they listened. (They didn’t vote it then.) The following spring I spoke about it again. It’s in its 10th year now, and they finally got a vote, and it was decided that we would send our soccer champions to the pÃ©tanque game, and I have worked for a decade to make this pÃ©tanque game happen. .

But it was Cohen’s response in a post-game interview that made Thomas smile and thank him for passing the Celebration Bowl.

â€œMy favorite memory is the post-match press conference where the student-athletes were interviewed and one of the reporters asked, ‘How was the ball experience,’â€ said Thomas. “Cohen said,” This is exceptional. They treated us like royalty. That’s what was part of the vision, to give the student-athlete a bowl experience on a national platform, a national stage. “

Along with the growth of the Celebration Bowl, Thomas believes HBCU sports have grown and progressed this season. He credits ESPN and their decision to invest in them.

â€œESPN deserves huge congratulations as they have invested their resources in the HBCU sports program,â€ said Thomas. â€œI remember as a head coach in the mid-80s, the State of South Carolina was playing Grambling Thursday night on ESPN. ESPN had the foresight that there was value in MEAC and SWAC and that they needed to invest.

This year, Falcons legend Deion Sanders brings his Jackson State team to the school’s first Celebration Bowl appearance. Thomas applauds Sanders and what he did.

â€œI congratulate him and everyone who walks into an institution and improves it,â€ Thomas said. “He did a commendable job and he used his national notoriety as ‘Prime Time’ to improve his program.”

Thomas also gives credit to other coaches and former NFL players who returned to coach with the HBCUs, such as Ken Riley at Florida A&M and Larry Little at North Carolina Central and Bethune-Cookman.

â€œWe’ve had former NFL coaches to come coach, especially in the MEAC for a long time,â€ Thomas said. “… Not many people are aware of our history of having former NFL players as head coaches at our HBCU institutions.”

Thomas is happy that he never gave up on his vision and wants the Celebration Bowl to continue to grow.

â€œWith all the great visions there are difficulties and you have to persevere,â€ said Thomas. â€œYou cannot let go of the vision. I think in the future the Celebration Bowl, Executive Director John Grant, will be doing well. I believe you’re either getting better or getting worse, no in-between.