The improvements Celtic have made under new manager Ange Postecoglou are evident, but the data mining highlights just how much the Aussie has changed things from last season.

With one game remaining in the Premiership, Celtic comfortably have the stingiest defense – 22 goals conceded, eight less than top Rangers – and the most prolific attack – 86 scored, nine more than anyone else, to 29 and 78 one year ago. With three points to play, they have already improved their 2020-21 points tally significantly (90, from 77), with just 12 points dropped (from six draws) in the last 31 games after losing three of the first six.

It’s by digging a little deeper that things start to get interesting.

One of the best ways to measure a team’s quality is to track their expected goals (xG) and expected goals against (xGA) over a season as a moving average – that way you get a more complete picture how they create chances and prevent the opposition from carving out theirs.

It’s hardly telling that Celtic have improved both of their rolling xG values ​​from last season.

In 2020-21 their ability to create chances dipped under Neil Lennon before experiencing a minor resurgence after John Kennedy was named interim manager in late February. They started allowing more high quality chances too, and the closeness between xG and xGA at the end of the season bluntly illustrates how poor Celtic were as their dream of 10 in a row ended with the trophy in the hands of rivals Rangers instead.

Under summer appointment at Postecoglou, Celtic was the height of regularity.

On a 10-game average, they created chances worthy of more than two goals per game, despite being well below that benchmark for long stretches last season. Defense wasn’t a major issue in 2020-21 but has been excellent this year, and you can spot on the graph the time in October when Postecoglou tweaked their approach so Celtic had better control of games – around the bar of 10 games.

Another curious comparison with last year is Celtic’s goalscoring distribution.

While 21 players found the net for them in the Premiership last season, Odsonne Edouard, Moi Elyounoussi and David Turnbull bore the brunt of the goalscoring responsibility, accounting for just under half of Celtic’s 71 non-penalty goals. Unusually for a title-challenging side, and perhaps reflecting their lackluster season, only six players have scored four or more times in the 38 league games. 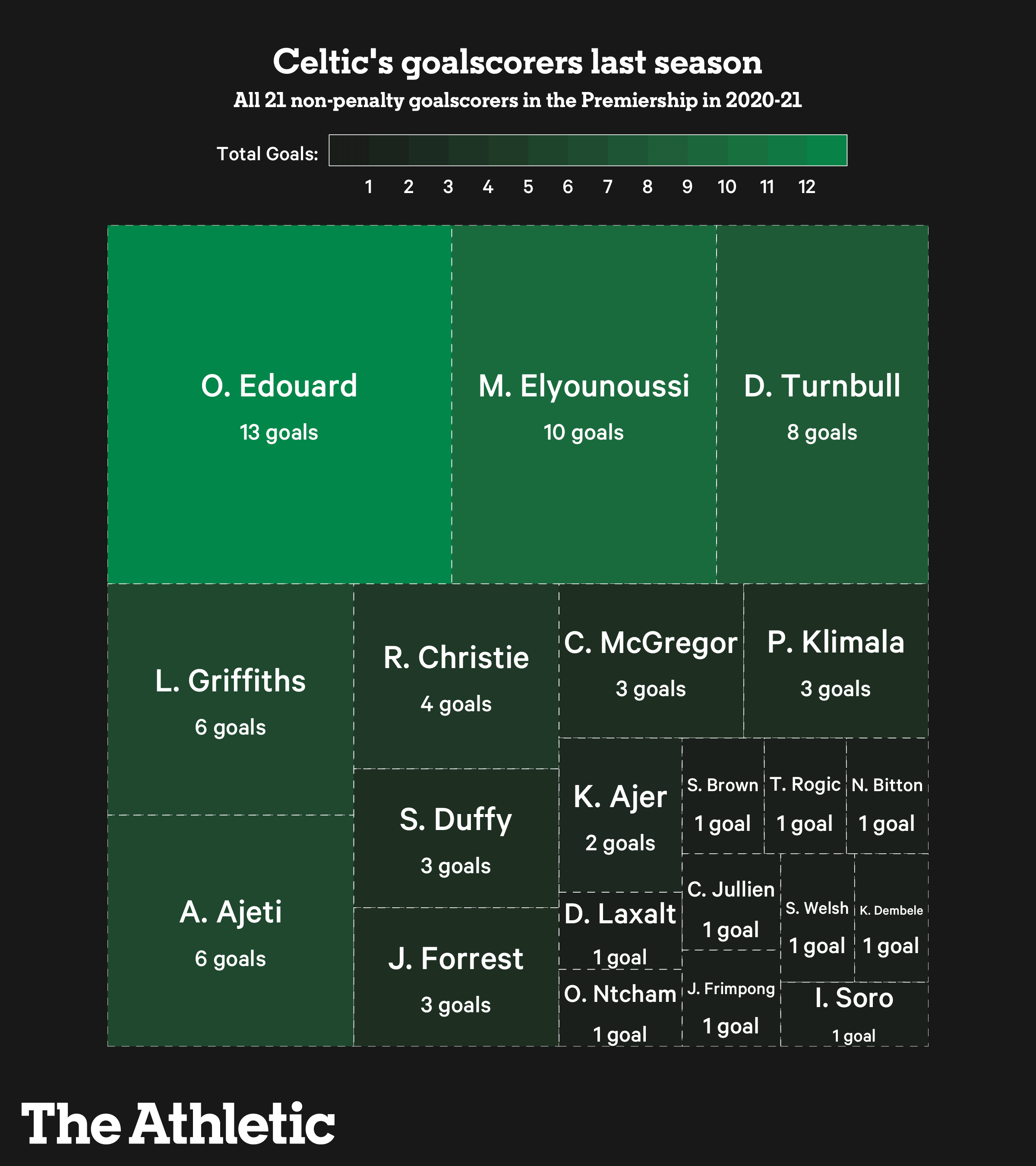 This season, the goal load has been shared more evenly.

Eleven players have scored four or more goals (so far), including forwards, wingers, midfielders and defenders. Goals from all areas of the pitch are a sign of a healthy team composition. 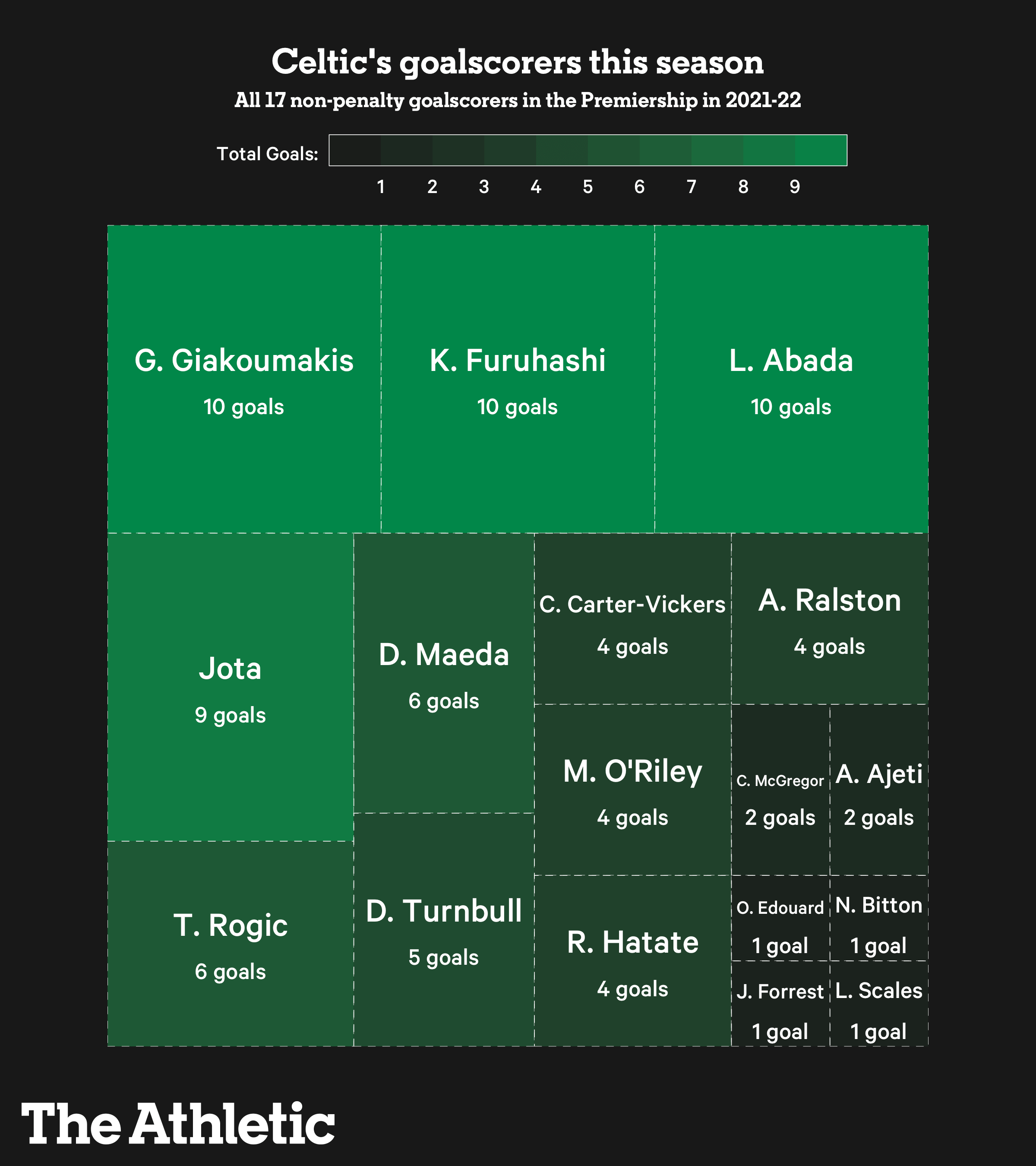 If Kyogo Furuhashi and Turnbull hadn’t missed 18 and 13 league games respectively through injury, it’s likely they would both have added significantly to their goalscoring tally. Likewise Matt O’Riley and Reo Hatate, two Celtic players only signed in January, while Giorgos Giakoumakis suffered a plethora of fitness and adjustment issues in the first half of his first season and n only played sparingly in the league (five appearances, two starts) before the winter break after Christmas. There is a feeling that these five players in particular can contribute even more goals in the future.

One difference from last season suggested by the eye test is that Celtic have better control of games under Postecoglou.

While xGA is a useful measure of control over games, another is “streaks with more than nine passes” in games. The principle is that the more streaks a team has with nine or more passes in a given game, the more control they have of them – they not only dominate possession but also tempo, with so many extended runs of play.

Again, as with xG and xGA, we can track the moving average of this metric over the course of a season to better understand Celtic’s success in boss games. 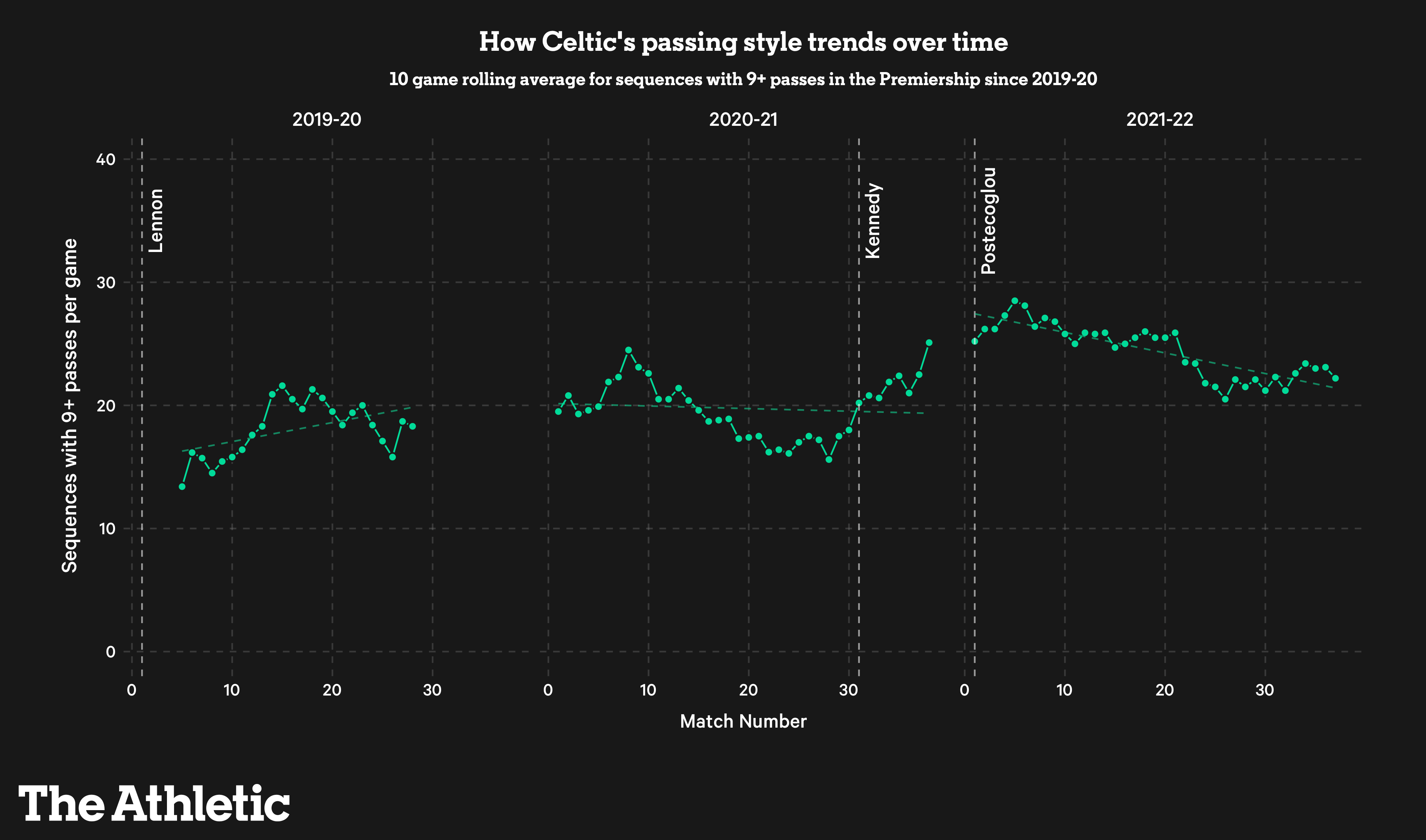 Along with the turnover of xG and xGA, note the drop in average streaks over the past season, before that bump with Kennedy in interim charge at the end.

This season, Celtic are showing an upward trend in long streaks, maintained consistently throughout the campaign as they have never dropped below 20 passing streaks over nine in 37 games. This suggests a greater degree of control within these games.

The last notable area of ​​comparison is or Celtic created their chances.

Because Lennon often favored a 4-2-3-1 last year, it makes sense that the biggest share of Celtic’s chances were created through the middle, with Turnbull, Tom Rogic or Ryan Christie pulling the strings in as a No.10, and Edouard often dropping deep in central areas to tie the game.

It’s not that Celtic didn’t have width, with Jeremie Frimpong, Elyounoussi and James Forrest among their creative wide players, more that trying to create chances vertically matches the emphasis on playing a No. 10. 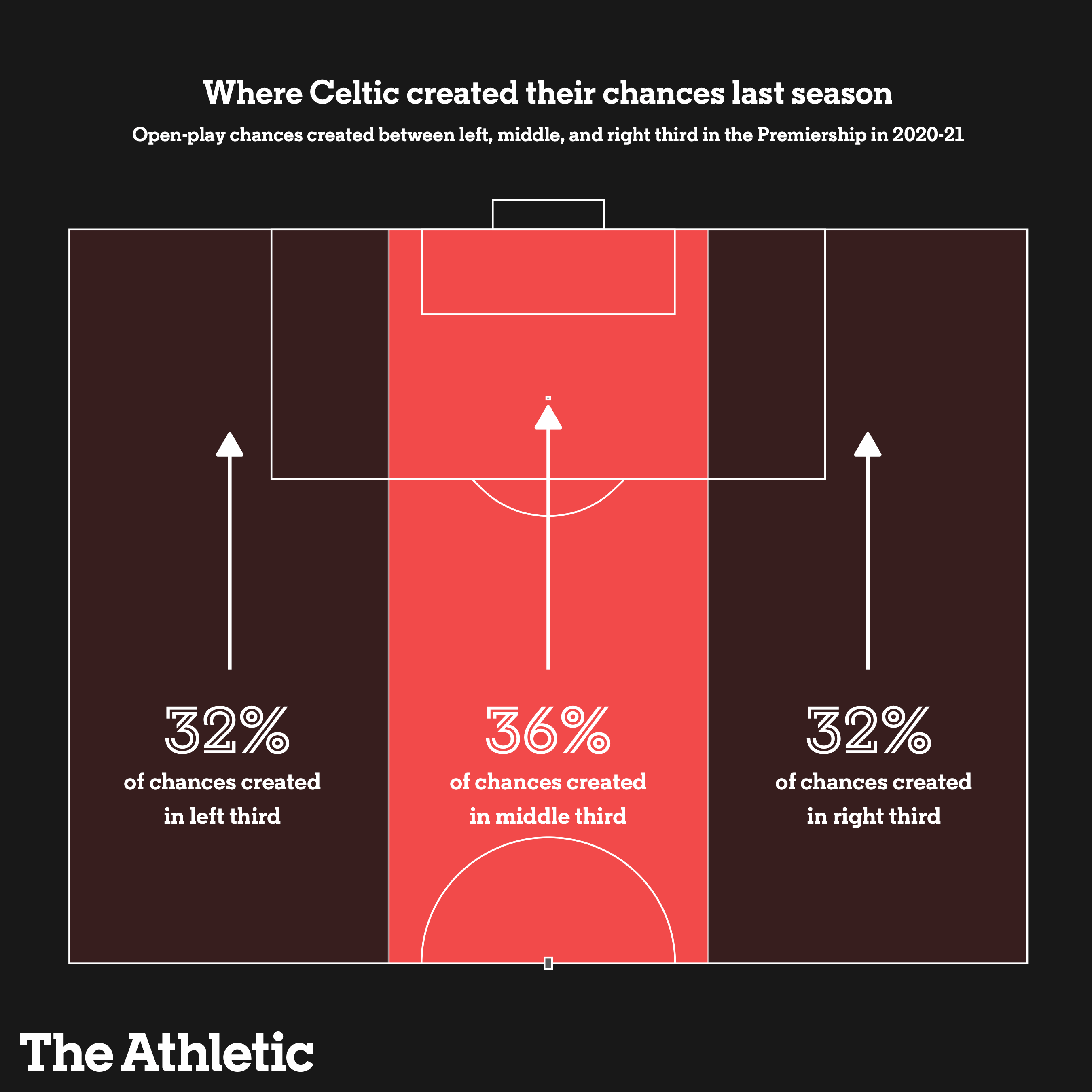 Most of their chances this season have come from Celtic’s right flank.

While this partly reflects Postecoglou favoring width more than Lennon, it likely has more to do with the effectiveness of their wide players on the right side, especially the two right-backs.

Anthony Ralston’s crosses have been dangerous, as eight league assists suggest this season, while Josip Juranovic’s creativity and heavy involvement in the builder’s play when he played likely influenced this next chart below. also below. 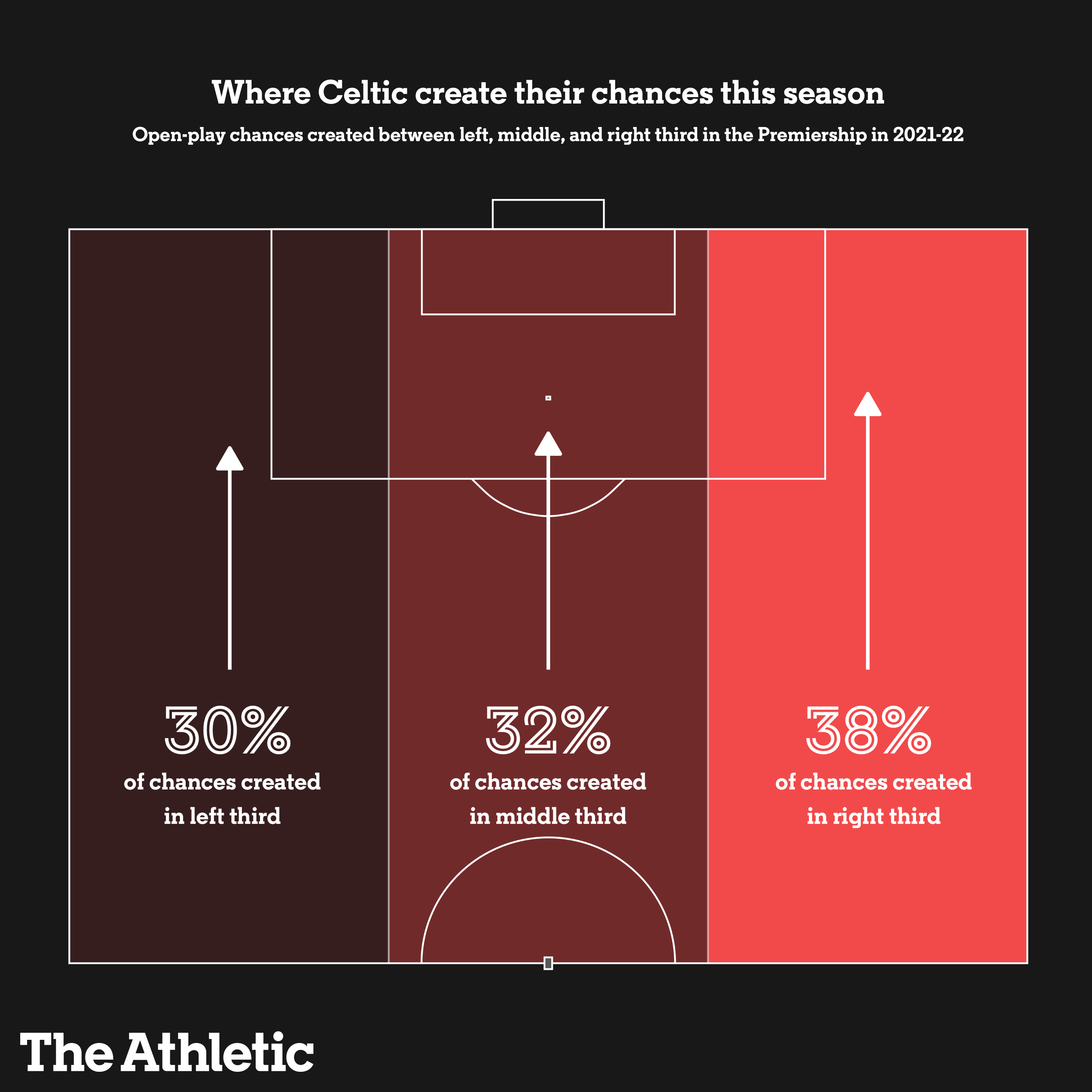 This season has seen Celtic create far more game-by-game chances than in the previous one, and they are more effective at preventing opponents from doing the same.

They also exercised greater control over the tempo of games and had a healthier spread of goals within their squad.

The year-on-year improvement has been significant, but it’s also possible that the metric charts above will show even greater improvements this time next season, with Postecoglou looking to build on that strong foundation over the course of the year. the second year of his reign.